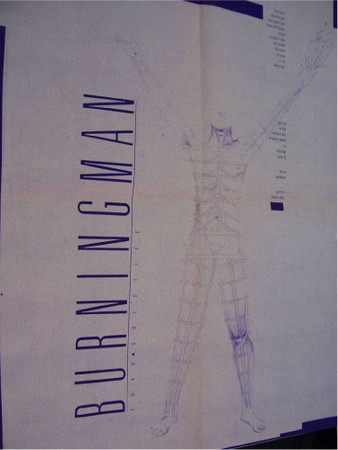 Possibly the first documented item where event is named Burning Man. This poster was used to announce event on Baker Beach. Similar to 1987 Flyer, this poster uses a quote from the poem "The Forces That Through the Green Fuse Drives the Flower" by Dylan Thomas. Photo Edward Ingraham

By 1988 they were committing to it fully — building a Man nearly as tall as he is now, around forty feet, and striving to attract an audience beyond their immediate friends.

They began making posters and flyers and even T-shirts. Building and promoting the Man was taking Jerry many weekends, all through the spring, and he enlisted the help of some of his co-workers and others. 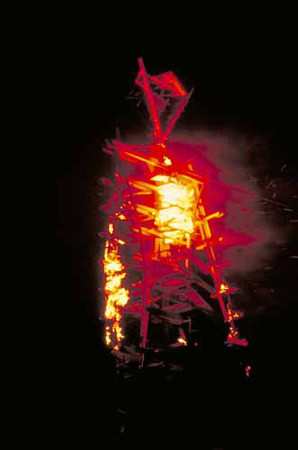 "The Man was presoaked with kerosene, his legs and body stuffed with newspaper and wrapper with burlap skin, also all soaked with kerosene. It was another blustery cold evening, and he was on fire and the burlap and newspapers blew away in ashes, but the Man, through charred, was still standing.

That's when the Man had his first encounter with the Man, Jerry recalls ... Larry and I decided to talk to the cops, and after a short negotiation, they agreed to allow us to knock down the Man and finish burning it. We sawed him in half in a few places, threw him in a pile, and finished burning it.

"It was obviously an extraordinary thing for the cops. They sure didn't come across that every day. They probably feared we'd start slaughtering goats there on Baker Beach."

... Despite the Man's inauspicious end, and the ominous signs that their spontaneous expression was bothering the authorities in San Francisco, 1988 was a pivotal year in the life of Burning Man. it was the first year that the Cacophony Society discovered the Man, and liked what they saw."

Brian Doherty –- This is Burning Man