"…the Java Cow is a Community legend which appears with hot coffee at sunrise on the morning of the Burn and asks the question: "Do you want cream or sugar with your coffee?"

I spoke with the Java Cow, and he stated that he stopped this tradition after about 1999, when the structure of the Man got so big that a one-man performance was lost in the noise surrounding it." 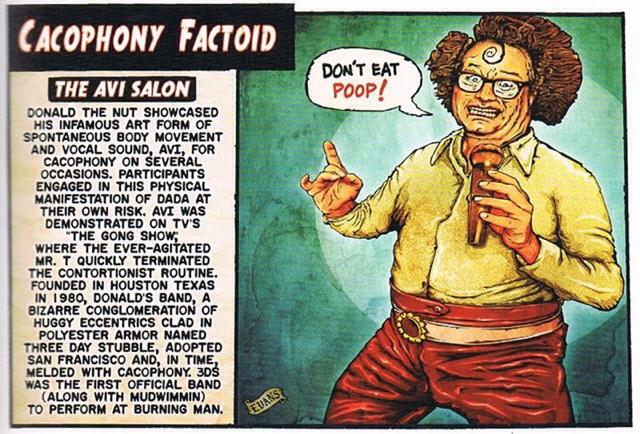 Mud Wimmin2 at the Doggie Heads

“… Then came 1993. I will never forget the sunset before the Burn. … the entire camp was arranged around a circle – a deliberate circling of the wagons. For me, that was the year it all came together. That one circle was our first street, and the prototype for what is now Center Camp. Remember, the entire encampment was smaller than today’s Center Camp. We held the formal cocktail party in the center of the circle — there was no cafe… cocktail party time. 1993. Sunset. Center circle. The clouds took on a brilliant magenta hue with orange highlights. The Man was lit, blue, to the East of us, standing taller than the mountains. We were all decked out, in our heinously formal jackets and gowns. I was watching the beautiful Calico Mountains to the west, with their streaks of white, orange and red soil. The sky cast a magical glow over the proceedings.

And then they arrived. From one side of the circle, arm-in-arm, a troupe of fully decked-out and frocked-up drag queens from San Francisco came sauntering up to the party. All eyes were on them. They had pulled out all the stops. Velvet corsets, fishnets, enough make-up to embarrass Mary Kay herself. Boots, heels…stilettos. Vermilion, burgundy; skirts, lace, garters. In the glow of the sun-streaked sky their outfits were positively stunning. The conversation ceased, and something — something just *clicked*. It all fit so perfectly together. This purely gratuitous display of ostentation became the modus operandi of the entire community.” 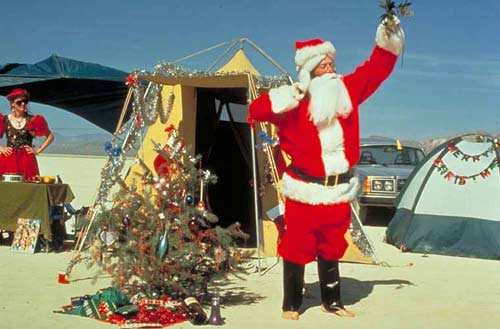 "A fellow from the Cacophony Society, Peter Doty, created this interactive scenario... He called it Christmas Camp. The man dressed up in a Santa Claus outfit for about five days in hundred degree temperatures. They hung colored lights and played Christmas carols 24 hours a day, and everybody moved away from them. It was the most irritating thing you could imagine.

But it was meant to be cathartic, of course, because Christmas is the most irritating holiday you can imagine. And so, he turned the great consumer holiday on end. If you walked past, they would practically drag you over and offer you eggnog, which had alcohol in it. But to get to the eggnog, you had to eat the fruitcake. They had created this whole interactive scenario that was very socially coercive, and it was the greatest, most cathartic, Christmas I've ever experienced."

LA VIE BOHÉME — A History of Burning Man, a lecture by Larry Harvey A Good Day at Black Rock

Early Days, Kevin Evans in the Black Rock Desert at the Drive By Shooting Range