"it’s a community, community is fine, you can build community anywhere. You should be building it where you live, whether that's in your neighborhood in down town Chicago or small town in the Sierra foothills or where every you live, it doesn't really matter. you just have to work at that shit, and this gives us an opportunity to come out and practice and try some things and see what happens."

"Ah such auspicious beginnings. The first Issue of Piss Clear was simply a photo-copied 'zine -- two sheets of 8.5" x 11" paper folded lengthwise, so it could be easily stapled together. I think I printed just 200 copies. 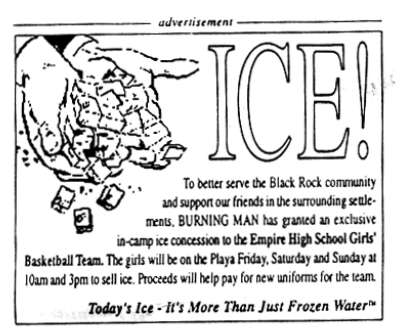 Trash fence was started in ’95 by a guy named Ember, or Larry Breed, a quiet guy who blossomed within Cacophony. (That’s what happens to all of us in Cacophony.) They were all going crazy over trash blowing downwind, and Ember suggested it to the ops department.

"They should make a bronze plaque for that guy for starting the trash fence," John Law says. "He did it for years after I left, too. It was all Ember’s idea, and I regard him as a hero." Summer Burkes - Early Man: Proto-DPW

By day this boom town sprawls around a central hub designed to form a giant compass, and settlement is so dispersed that communication between remote points becomes a (challenging) necessity.

Accordingly, we publish a daily desk-top newspaper and broadcast a 24 hour FM radio station. This year we will again transmit live video via satellite to the Internet and a plan is underway to feature other burning effigies simulcast in different time zones. By night the playa is transformed into a galaxy of lights – synaptic nodes within a dreaming brain. Society convenes spontaneously around these fire-lit conferences. And there are times, as one drifts through this exotic nighttime world, when heaven and Earth seem to merge. Any given point of light in this disorienting darkness might be 4, 40, or – should one happen to fix on a low-lying star – 400 billion miles distant. The only orienting point becomes the four-story tall Burning Man. Car lights veer and drift on disconcerting vectors, and fireworks flash overhead. The blue neon glow of the Man becomes a beacon – the ultimate gathering place and ceremonial center for a society suspended in a void.

We believe the Black Rock Desert, a place which in itself is tantamount to Outer Space, also models the experience of technologic inner space; the equally vast frontier of the Internet. Stationed before our computers we are exiled from the passionate immediacy and physical contact that culture needs to survive. Perhaps communication, by itself, is not enough. A more direct communion is required. It is in this spirit that we offer Burning Man as a space station on the Internet. For many of us, it’s time to come home.

– Darryl Van Rhey
Interviewed by Robert B. Gelman on 13 August 1995 for RadioNet Talk Radio, the Internet’s first talk radio show on air on KSCO in Santa Cruz July ’94 to Oct ’96 and a RealAudio beta

“Welcome to Nowhere. Its name is whatever you name it. Its wealth is whatever you bring it. Next week it will be gone, but next week might as well be never. You are here now."
Stuart Mangrum – The Black Rock Gazette

From 1991 until 1994, the one-man Monkeybeans operation kept our band of displaced urbanites sufficiently caffeinated. By 1994, he worked about 20 hours a day. ... by the end of the weekend festivities, he declined to come again.

Facing the following year without a ready source of morning lattes, I proposed to Larry Harvey that we should have a camp café. After all, we had grown from a mere encampment to a fledgling city, with all the essential human services of any other city—a medical tent, the DPW, the Rangers, and so on. And a city was not complete without a café. Larry issued an immediate executive decision: "Okay. You do it."

That first year, I was given a budget to work with, around $400.00, to cover renting a machine, and getting enough coffee, cups, cream, and sugar to last us for a weekend. People volunteered to create a structure to house it and make signs. Others agreed to work the counter. ...

Café Temps Perdu—the café of lost time—opened on a beautiful day in the season of ’95 and got off to a limping start, since no one knew it was there, even if it was in the center of camp, and the only structure within the enormous circular center of camp—the bull’s eye—positioned so that the counter of the café looked down the lantern-lit Avenue of Art, and at the Burning Man at the very end. I said it should be there because then the workers could watch the burn from behind the counter.

However, on the second day, the weather took a sudden turn for the worse, and a virulent dust storm levelled the thing, leaving only the espresso machine standing... There’s only one reasonable thing to do in that environment, and that is be one with the dust. You have to revel in it.

The community rose to the challenge, having finally seen the espresso machine, and immediately seeing the value in getting the source of caffeine in functioning order. Volunteers stepped in and re-fashioned some kind of structure for us to operate in for the next 24 hours.

P Segal - as yet unpublished memoirs 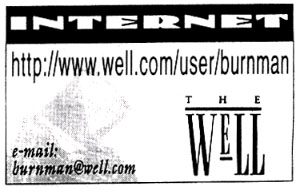 Burning Man's first web presence on the WELL is advertised in the Black Rock Gazette.