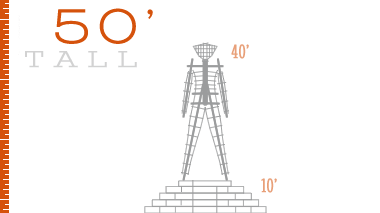 Man on hay bales
Burning Man 1997 :: An ABC Nightline Investigation
In November 1996, Burning Man was the cover story for Wired magazine, and ...Bruce Sterling called it "the New American Holiday. CNN also reported calling it "the world's most dangerous art festival." In other words, by 1997, the secret was definitely out. Adrian Roberts - BURNING MAN LIVE, 13 years of Piss Clear 1995 was the first year of Theme Camp Placement, but 1997 was the first time Black Rock City was clearly defined geographically, with a map showing camp placement:

In 1997, when the growing population necessitated our first fully-conceived city layout (see Rod Garrett’s post Designing Black Rock City for more information), I placed theme camps along the Esplanade frontage, delineating the end of the city proper and the beginning of our central art space on the open playa. Placement was done largely to honor those creating the interactive camps, to curate an experience for citizens, and to activate an area that had significance. To this day this is still largely the intent of placing theme camps throughout Black Rock City. Harley K. DuBois - Managing Diversity: The Zoning of Black Rock City I encountered the "Vege-o-matic" . . It's straight out of hell, suggesting engineering from the industrial revolution transported to Fritz Lang's Metropolis. Part vehicle, part flame-thrower, part earth drilling device, I envision this machine being used to battle creatures in a 1950's monster movie, or to torture souls of the damned in the realm of satan. I'm immediately fascinated.

Sitting atop the thing, its creator Jim Mason invokes the motor which rotates the intimidating giant drill-bit head. A pressurized gas-charger propels a massive flame as much as seventy feet from the barrel at its center. A hand-crank allows Jim to raise the angle of the barrel to about 45 degrees so that it is now pointing at a large helium balloon about forty feet away. ...

A man with a bullhorn, known in the performance world as "Chicken John," offers a warning to the owners of the camp with the helium balloon: "step aside." Faced with this machine and the angry mob, that's exactly what they do. Then in an instant, a very loud, very hot, very bright arm of flame reaches out for the balloon, clenching it in a heated grasp. The explosion it creates is awesome enough to quiet the mob. Just a little, and for just a little while.

... Chicken John jumps onstage and insists to the DJ, "Play some Led Zeppelin!" The "Vege-o-matic" lets out a motorized groan and a flaming belch in response. The overgrown drill-bit nose is now dripping gasoline in flames like the devil with a wet cold. A scene from Hieronymous Bosch's painting of "Hell" flashes across my mind.

The DJ is Goa Gil, and perhaps due to his nature, or perhaps the fact that he has come all the way from India, he is hardly reacting to the implied threat. In fact, he is turning up the volume in peaceful defiance of the metal invasion in front of him. ... The crew of the machine is tilting the flamethrower's barrel up at the console. Gil is staring down the 12-foot barrel of this jet powered char-broiler. I had to remind myself that this is theatre, or is it?

There is one more challenge that we've been waiting to see the vege-o-matic meet. Jim had envisioned this encounter from the start, and has gone to great expense and effort to make it real. He has created a 15-foot high ball of solid ice in the middle of what is known as Black Rock City. ...The crowd is larger than ever, and shouting for violence against the target. As far as I can tell, there are no cheerleaders for the ice.

This year Burning Man was off to Hualapai (“wall-a-pie”).

The weather was nearly perfect since the wind and dust storms common to the Black Rock playa passed us by due to the event being held on Hualapai flat and the Fly Ranch, however 1997 was a year that tested the organization. 100% of gate ticket sales were impounded at the gate by the Washoe County sheriff’s office. There were several key staff members from 1996 who chose not to continue their roles, and new organizers stepped forward to fill the empty shoes.

Cleanup was problematic, hampered not only by the tall grasses on the event site, but also by the mercurial nature of the landlord who removed our staff at one point. It took several years to overcome the bad public relations we suffered from in 1997, and to repair political ties with the county. 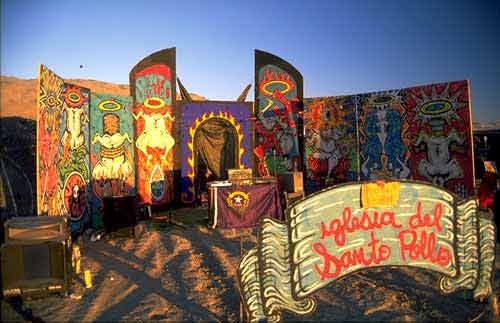 Theme Camps had become a regular staple of Burning Man by this point and the first list of registered Theme Camps is from 1997.

The Blue Light District (one of the first Villages) consisted of smaller Theme Camps such as SPACE COWGIRLS CAMP, PLAYAVISION, LAKE LAHONTAN YACHT CLUB, POSTMAN OF THE PLAYA and the BARBIE VILLAGE This year marked the first time that Black Rock City was laid out like a real city, with planned streets, and a semblance of civic structure. The shape of the city map looked more like a giant 'V', instead of the current circular 'C' shape. ...

Driving and cars and shooting guns were banned, and as much as "old-timers' like to talk about the "good ol' days", this was actually a good thing. You get 10,000 people together, you're bound to have a few assholes, and the previous year definitely proved that. Seeing as that we spent every night in 1995 in fear of being run over in our tents by car speeding across the playa toward the "rave camp", we whole-heartedly welcomed the new "no driving policy". Adrian Roberts -- BURNING MAN LIVE, 13 years of Piss Clear
Theme Camps and Notable Destinations
Music
Ticket price: $50, $65 Larry Harvey’s 1997 Speech, called to address the financial quandary the organization found itself in, was one for the ages. People who had paid their 50$ to get in were asked to contribute to keep the event alive and we did contribute because we cared about the event and its survival. Classic lines included

"So when the dust settles on this, an anybody asks you if we're locusts... no, you tell them we're human beings."

"If anybody wants to give us five, five hundred dollars, they are lifetime Burning Man. They can come forever."

The Spring Newsletter announces "Very Soon you can visit our new website"
The first Jack Rabbit Speaks was sent in 1997. It was an email the JackRabbit sent to a group of people after she'd attended a meeting with Larry Harvey and thought that group might be interested in the info shared.

That list of emails grew exponentially every year after.