Man atop the Observatory The Flaming Lotus Girls' "Seven Sisters" was an installation of fire sculptures representing the stars of the Pleiades constellation. The Department of Motor Vehicles responded to participant feedback in 2004 with a new policy for mutant vehicles, requiring all art vehicle users to pre-register in order to obtain approval to drive during the event. There was Brian out there reading his book in a dust storm, that was his gift - Larry Harvey

I tried reading the entire book from start to finish, in a dust storm. I got to around page 75. the dust storm part was not deliberate, it was just what happened the night I set aside to do this. Flash of all people talked sense into me and told me I didn't need to kill myself doing the whole thing. - Brain Doherty 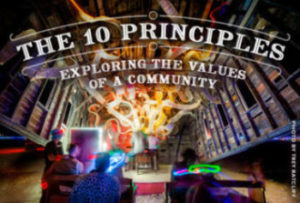 Burning Man Founder Larry Harvey wrote the Ten Principles in 2004 as guidelines for the newly-formed Regionals Network. They were crafted not as a dictate of how people should be and act, but as a reflection of the community's ethos and culture as it had organically developed since the event's inception. David Best's Temple of Stars was a quarter-mile long edifice inspired by Japanese architectural influences, and was once again a source of meditative peace, reverence and emotional catharsis for those who enjoyed its sprawling walkways and towering spire. Early in 2004, the Burning Man Project launched the expansion of the Regional program, which created the Burning Man Regional Network. Further enhancing and supporting the efforts of our community's Regional Contacts, the Network provides a means for regional groups to gather, collaborate and interact all year long.

The beautifully contemplative Pagoda of Infinite Reflection was the product of a collaborative effort by the South Bay (CA) Regional Group, who created a visually stunning example of the strength found in a connected community. The Black Rock Gazette features one of many Pants Cannons incidents - the Pantzooka Patrol. BRG September 1, 2004

In 2004, we witnessed an evolutionary jump in the development of the grand experiment that is the Burning Man project. Every year, we experience new challenges. And every year, we rise to those challenges, and we grow from the experience. On all fronts, 2004 was a growing year, and one of new realities in our shared experience creating Burning Man.

With 19 events under our collective belt, the Burning Man organizers and participants were able to draw upon their deep well of past experience to meet our challenges; every lesson learned adding surety and grace to the creation of Black Rock City.

The Burning Man staff worked diligently since the end of the 2003 event to prepare for 2004. In our ongoing endeavor to streamline efforts and “organize chaos” more smoothly, we developed some new processes for planning our city.

As we played, danced, labored, told stories and sang, the playa handed us some of her most unpredictable weather patterns ever, from dust storms to rain, to blazing heat and back again (the cleanup crew even worked with a view of snow on the mountaintops late in the season). Following several years of relatively benign weather, participants learned the true meaning of radical self-reliance as we faced high winds, whiteouts and frigid evening temperatures.

According to reports, around 40 projects with registered either did not show up, or set their project up in their camps instead of on the playa, many citing weather as their reason for this decision. The Man stood atop an Observatory in the form of a geodesic dome resting on a round base embellished with classical columns. The interior of the dome served as a gallery housing ten interactive installations, as well as Tim Black's installation Optical Acoustics. The ground floor exterior contained ten small stages, each defined by a diorama, designed by ten different participants. We asked participants to claim one of the stages and direct interactive theater, which created an easy way join in supporting the theme.
One year in the Observatory Man Base we sent a message to Betelgeuse that read “You’re part of history in the making so make the most of your time” 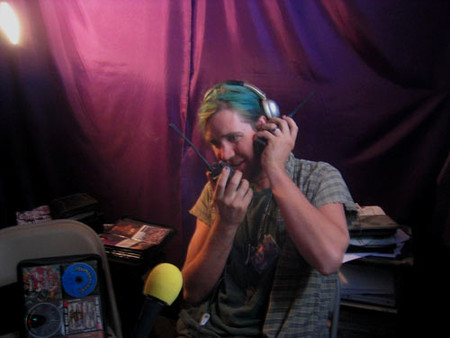 BMIR 94.5 FM came into being in 2001, primarily as an outlet for potential emergency announcements and a source of orientation information for citizens new to Black Rock City. With the exception of the live Exodus show, the station ran almost exclusively from automated software, which allowed it to be on-air 24 hours a day. But after 3 years of broadcasting ... the station was beginning to feel a little . . . automated. ...We decided that 2004 would be the year that BMIR would go live. $teven Ra$pa and LadyBee hosted a discussion with Jadu Beta artist Saul Melman, while $teven and ActionGrl led a roundtable discussion of the Regionals movement with Regional Reps from around the country...this new level of operations created a free-form public-radio forum for the BRC community. Participants could drop by to interact with the DJs in the studio and with the city on-air. We've always done our best to make the station sound like the playa feels, striving for that perfect synergistic bliss. We have always tried to program a diverse range of music that reflects the city's diverse population. - Eric Myers, AfterBurn Report The event took place inside and across the street from The Crucible in Oakland. Working in collaboration with The Crucible, and with the support of the City of Oakland, the Oakland Museum of California, and the Oakland Police and Fire Departments, Fire Arts Festival 2004 opened to accolades and became a resounding success.