Man on Baker Beach &
the Black Rock Desert
Labor day weekend, 1989. I ... attended a wind sculpture event in the Black Rock Desert sponsored by the creative collective "Planet X" in Gerlach, Nevada. .. That weekend was one that had a great and lasting impact on my life. I never wanted to leave. The desert attracted and stirred in me; I knew I had to go back.

...when I returned to the Bay Area... I rallied a few friends and schoolmates around the idea of planning a Labor Day weekend trip to the Black Rock Desert. I had been reading essays by Hakim Bey and his ideas struck a chord...

A few months from the target date of the expedition, many of us from the Cacophony Society attended what was to be the last Baker Beach burn of Burning Man in San Francisco. fortunately, via the intervention of local authorities, the monolithic figurine was not razed. Amidst chants of "burn it anyway!" and pagan-like drumming, a few of us Cacophonists, including Miss P and Dawn, thought it would be a great idea to invite the architects of the wooden construct along for our voyage to the bizarre setting, making it the biggest, most elaborate piece of firewood - a glorious conflagration." 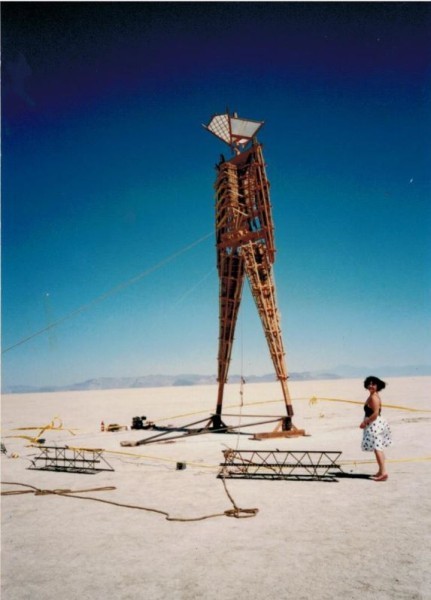 Crossing the Line ceremony at the edge of the playa in 1990.

As we prepared the effigy for Baker Beach, we learned that the Golden Gate Park Police (GGNRA) had “discovered” this event and decided because of the potential fire hazard (half of Los Angeles, as it usually does around this time, was engulfed in various intensities of hill fires) to the surrounding hillside that we could not burn the statue. The police was represented by a lone officer on a motor bike who had come to Baker Beach to issue his edict. We negotiated a compromise: we could build and erect The Man, but not burn him.

The agreement not to burn the statue transformed the audience into an unhappy unruly mob, as Larry realized what had been a celebration had become, to the crowd, a “mere roadside attraction.” At that point Larry realized that Burning Man at Baker Beach had reached the limits of its presentation in San Francisco, and one way or another, the statue and its celebration would have to appear somewhere else. Lowered and dismantled, the statue was put back in storage.

Louis Brill – THE FIRST YEAR IN THE DESERT The move to the Black Rock Desert represented an epochal change. Survival camping was a challenge. In a very real sense, everyone perforce was a participant. A pilgrimage was now required to reach the home of Burning Man, and he resided in a consecrated space, a place apart and separate from the ordinary world. The desert had enlarged the scope of human struggle and intensified involvement. It had restored the spirit of Burning Man and the community that had grown around it. Most importantly, beneath its sentinel presence, a city had begun to form.

Read More
Most of our Cacophony exploits did not take up an entire weekend, but just a few hours. ...

This time, our joint adventure had a purpose. In the back of the 30-foot long Ryder truck, the disassembled figure of a man, with a wooden exoskeleton and a Japanese lantern head, awaited its demise at the desert. When the figure was assembled, it towered to 40 feet above the ground. It would rise in the sublime emptiness of the Black Rock, and stand for two days. On the third day, at nightfall, it would be burned.

Four years before, our friends Larry Harvey and Jerry James had cobbled together a much less impressive figure, a haphazard man of only ten feet. On Memorial Day weekend, they had taken this figure down to Baker Beach in the city. As the sky transmuted from Maxfield Parrish blue to a deep Persian, they ignited the figure, and watched it burn against the glints of light on the evening water.

... We all gossiped and dreamed, driving through the foothills of the Sierras after midnight. Around us, the black forest stood in silhouette against the dark gray sky, surreal and enveloping. Sometimes we rode in silence, hearing only the chunk-chunk of the road beneath our tires, and seeing, in our minds eyes, the Black Rock ahead....

as the last vestiges of civilization slipped behind us in sleepy Gerlach, the first real light came over the horizon. The road, now smooth and flat, rounded a bend, and off to our right, the inconceivable playa of the Black Rock Desert gleamed and twisted with dawn mirages.

This is the only place I've ever been, I said, Where there was absolutely nothing. 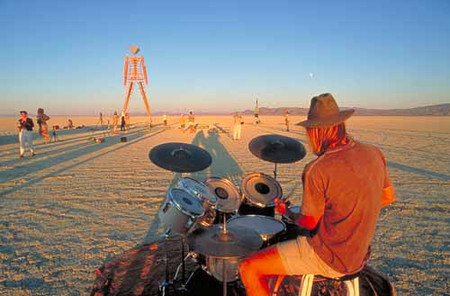