Burning Man and Carnival of Mirrors

Photo Gallery: the Carnival of Mirrors Midway by Ladybee

The Midway Is Calling, to You and to Burning Man by Caveat Magister 2015 saw 326 art pieces including The Department of Public Arts from Taiwan's "Mazu Goddess of the Empty Sea", "R-Evolution" by Marco Cochrane, Christian Ristow's "Becoming Human", "Blunderwood Portable" by The Cat and The Cockroach Collective, "Illumacanth" by Rebecca Anders, Alexandr Milov's "LOVE" and Michael Garlington's "Totem of Confessions", to name just a few, installed on playa, including more than 75 fire art projects, all of which were advised and vetted by the Fire Art Safety Team.

Speaking of fire, a record 20,020 gallons of propane were dispensed during the Burning Man event in 2015. Of that, 17,673 gallons were used for fire art including Mutant Vehicles, theme camp flame effects, and placed art projects. Burning Man also finally broke the $1 million mark for our Black Rock City grant program, and gifted approximately $1.2 million in monetary support to more than 100 art projects. Once completed it measured 72ft high. It's timber frame was clad with intricate panels, some of which had been designed and cut by young people in the Nerve Centre's Fablab. Everyone was invited to leave a memory behind, let go of the past and look to the future. Up to 60,000 people visited over the seven days it was open, covering the inside of the structure and it's pillar with personal messages.

On Saturday 21st March it was set alight at 8pm by eight individuals artist David Best had got to know over the course of the build, including Tony Doherty, Rossa O' Dochartaigh, Michelle McClaren, Paula Higgins and her son, Emma Diven, Bronah Mclaughlin and Kevin Strathern. 15,000 people watched Temple burn.

Burning Man Arts broke the $1 million mark for the Black Rock City Honorarium grant program in 2015, gifting approximately $1.2 million to more than 100 art projects, in addition to other non-financial support offered to honoraria and self-funded artists. The Temple of Promise, constructed by the Dreamers Guild, featured a 97 feet tall archway entrance that curved into a tapering and intimate structure. Along the way, alcoves formed by the supporting arches, as well as wooden sculptures reminiscent of stones in a stream, created altars and semi-private spaces for individuals and smaller gatherings where participants placed remembrances and gathered throughout the week. On Sunday, The Temple of Promise burned in a solemn, memorable and cleansing holy fire. The 9th annual Burning Man Global Leadership Conference included over 400 participants from around the world with report-outs of goings-on in Lithuania, Asia and Brazil. Global representatives and ambassadors of Burning Man culture met to share ideas, best practices and inspiration, and to make the invaluable face-to-face connections that may just lead to the next big thing. The event was covered in our blog. 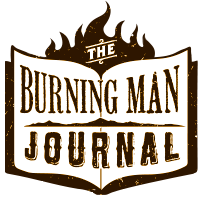