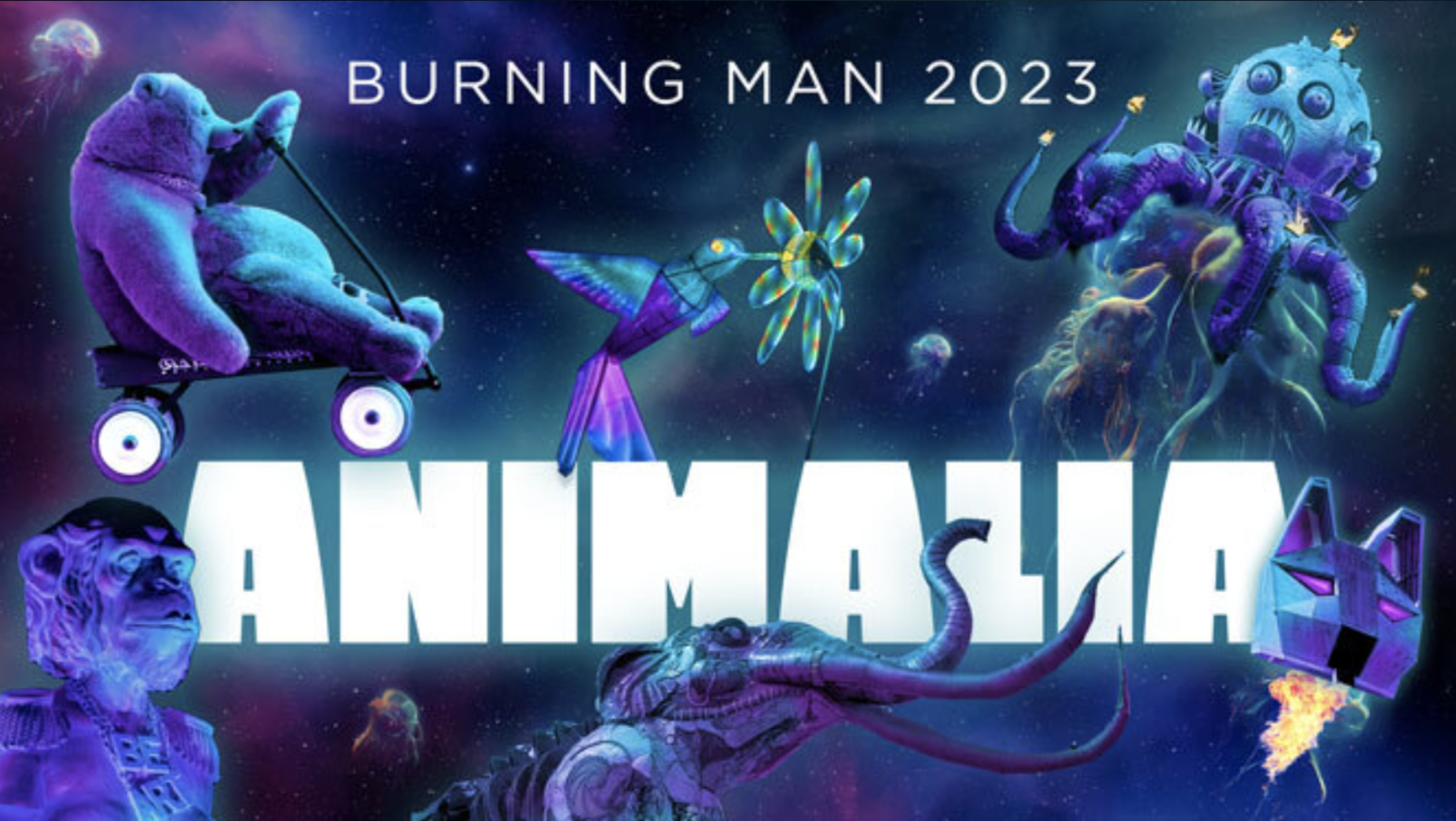 “Sometimes, I am the beast in the darkness.”―Heather Durham

The Black Rock Desert can appear at first glance to be lifeless—other than, of course, the silly humans who build a city there every summer—but this is far from the truth. Anyone familiar with the high desert knows that even out on a dry lakebed, the skies carry soaring ravens and buzzing insects, the fairy shrimp slumber below ground waiting for rain, and countless other species roam the transition zones where the playa edges into scrub and wetlands. But all that life pales in comparison to the endless menagerie of imagined animals we bring with us every time we come to Burning Man. The mythic beasts we carry with us in our minds—imagined or idealized, objects of fear or fancy, the animal spirits that populate our dreams and are so often brought to life on the playa: boars and horses and bears, wild geese and giant bison, snakes and squids and space whales, oh my!

And, of course us humanimals, a species of ape noted for complex language, advanced tool use, and lording it over the rest of the biosphere like we’re special.

This year’s Burning Man theme will celebrate the animal world and our place in it—animals real and imagined, mythic and remembered—and explore the curious mental constructs that allow us to believe that imagined animals are real, real animals are imagined, and that somehow, despite all evidence to the contrary, mankind is somehow not part of the animal kingdom.

“When animals behave like humans or when humans behave like animals, don’t be surprised, because in every animal there is a human and in every human there is an animal!” ―Mehmet Murat ildan

Animals that speak and act like humans inhabit a throughline in our collective mythology, from ancient myths and fairy tales to modern television. From the not-so-distant past, when the lines between men and animals and gods were not at all as certain as they may seem today, we inherit a body of fabulous characters like the wily talking hare Adanko of the Akan people, who survives in modern lore as the hero Bre’r Rabbit. Native American traditions are also rich with these sorts of creatures, from the trickster Coyote, sometimes portrayed as Man’s creator, to Raven who stole the sun, inadvertently giving humans the precious gift of fire. All around the world we see stories in this vein, about creatures with both human and non-human attributes, from the animal-headed gods of ancient Egypt to the Aztecs’ Tezcatlipoca, who took the form of a jaguar.

Animal deities may in fact be the first gods of early humanity. There is evidence that our Neanderthal ancestors worshiped the ferocious cave bear, Ursus spelaeus, and the ancients of the Mediterranean region may have similarly deified the Auroch, the wild ancestor to modern cattle. It’s worth noting that the cow and the bear are still held to be sacred in several of the world’s religions, and that mythology is full of stories of humans hybridizing with formidable creatures such as these, often with unfortunate results—from the Minotaur of the Cretan labyrinth to the Island of Doctor Moreau.

The notion of a human being and another animal being somehow entwined is also reflected in the traditions of tonalism, where every human has an animal counterpart to which their life is linked, determined at least in part by their date of birth. This belief remains evident in astrology, where being born under the sign of the lion, or the monkey, is thought to somehow shape one’s innate character. It’s also closely linked to the tradition of shape-shifting or therianthropy, which manifests around the world in forms as varied as the werewolves of Europe, the Mesoamerican nagual, the Korean kumiho, and any number of cinematic cat-people and bat-people.

No less magical are the mental constructs that allow us to sort the entire animal world into a few tidy buckets like wild or domesticated, pets or pests. Our pets are of course the nearest and dearest; for many of us, they bring more love and joy into our lives than most of the humans we know. Feral animals, on the other hand, are the object of either fear and loathing, as with household pests, or idealized admiration at a distance, as with whales or any other poster-animal for the freedom and majesty of the Wild. This kind of uncritical love, often an abstraction built from watching nature documentaries, is generally beneficial, as it fuels conservation efforts, and only occasionally dangerous when taken too far, as in the sad case of the deluded bear-hugger chronicled in the Herzog film Grizzly Man.

“A world that might have Bigfoot and the Loch Ness Monster is clearly superior to one that definitely does not.” ―Chris Van Allsburg

1.5 million living animal species have been identified, but that may be only a fraction of the total, which is estimated by some to be as high as seven million. Given that two-thirds of the known species are insects, that still leaves plenty of possibilities for new discoveries of larger lifeforms. Many humans are convinced that one of these will be the legendary sasquatch, or his Himalayan cousin the yeti. In a recent poll, 14% of Americans said they believe Bigfoot is real. That’s only half the number who believe in ETs, and a third of those who believe climate change is a hoax, but still, how can we talk about animal tropes and memes without considering cryptozoology?

Bigfoot, the yeti, the Loch Ness monster—though they may or may not exist in the real world, they certainly have legs (or flippers) in the collective imagination. There’s something ineffably romantic about the notion that they haven’t been caught because they don’t want to be caught, and that at least some corners of the animal world may still hold secrets beyond our knowing.

In our own little corner of the planet, Burners have developed a localized mythology of exotic animals. Consider the playa chicken, thought by some to be a knee-high dinosaur interrupted at some point in its evolution into a bird. There are tales of talking bunnies running in packs—some claim to have seen a billion of them at once—as well as the rabbit’s high-plains cousin the jackalope, whose existence has been documented primarily through taxidermy. Ancient Burners tell the legend of the Java Cow, who would appear at sunrise bearing fresh coffee (but, ironically, no milk). And trash pandas have been said to raid sleeping camps by night—not racoons but real pandas. Or at least wearing real panda onesies.

Of all the strange ideas that humans hold about the animal world, perhaps the strangest is the notion that humans are not in fact part of the animal world; that we have somehow evolved beyond our animality and now occupy a position apart from and superior to the rest. The myth of human exceptionalism has deep roots, fueled by thousands of years of religious cant, philosophical excuse-making, and scientific hoo-ha. The philosopher René Descartes, for instance, famously concluded that animals are mere automata, meat robots devoid of mind. The fact that he concluded humans may be essentially the same avoids the point: the otherness of animals runs deep in Western thought.

In The Third Chimpanzee, Jared Diamond argues that since human DNA is nearly 99% identical with that of chimpanzees and bonobos, any sensible alien scientist would quickly conclude that humans are members of the chimp family. He then proceeds to systematically dismantle all the sub-myths of human exceptionalism, from art-making and tool use to language and war-making. Argue all you want about which species you feel closer to (for my money it’s the fem-forward, free-love-loving bonobos) but nevertheless, the proof is in our genes: we are apes, descended from other apes, and before that from any number of hard-to-ignore-in-the-record lifeforms that walked, swam, crawled or slithered over the planet during the past few hundred million years. Sixty percent of human DNA, interestingly, is identical with that of an aquatic animal called the acorn worm, and fifty percent is the same as a housefly’s. We’re all made from the same funky starstuff, as Carl Sagan might have said, and we’re all part of a staggeringly vast web of life.

So why, then, do so many of us live in a make-believe world where humans are somehow apart from and superior to the rest of the animals in the zoo? It’s worth pondering, especially as humankind continues to make sport out of casually destroying complex ecosystems that sustain us all. The ultimate fate of the Anthropocene age may depend less on some hail-Mary sci-fi Singularity play than on our species collectively pulling our heads out into the (increasingly bright) sunlight and embracing the fact that we live in a world that is bigger than us, and acknowledging that we are part of a system rather than its masters.

“Just as we give standing to the fictive entities of corporations and the protected entity of the human child, can we not give standing to the life forms on which we humans are utterly dependent? Oceanic phytoplankton that make our atmospheres; arboreal canopies that breathe in our CO2; the mycorrhizae that knit soil together—these entities need protocols of respect and relation by which we account for the more-than-human that makes life possible.” —Caroline A. Jones

Burning Man’s Principle of Immediacy speaks to embracing “a natural world exceeding human powers,” suggesting that our humanist values don’t and can’t tell the whole story of our culture. And taken as a whole, the 10 Principles can be seen as speaking to an attitude of compassion, cooperation and respect for all life. So if a unicorn mutant vehicle and a trash panda can be friends, does that not instill hope that all of us, regardless of our totem animals, food preferences, or pet allergies, can join paws in communal effort?

This coming year in Black Rock City, or wherever you burn, you are invited to bring your imaginary menagerie with you. Not flesh-and-blood animals, thank you very much, but the creatures of spirit that give you confidence and courage, and that may express themselves in whatever art you choose to create. And, of course, to comport yourself like evolved humans, in the best sense of the word, with love and respect for our fellow creatures great and small. Even that pesky playa chicken.

Burning Man’s annual Honoraria art grant program opens on October 17, 2022 with a call for Letters of Intent. Read all about it here. As always, art is welcome in Black Rock City regardless of theme. To find out more, have a look here at some of the many ways you can participate creatively.