Around 1989, members of the Cacophony Society turned up at our beach burns. Cacophony was somewhat amorphous; a “randomly gathered” network of eccentrics united by a publicly distributed newsletter that always stated, “You may already be a member.” Anyone could do events; these were often pranks, or might appropriate a feature of the urban landscape as a venue for guerrilla theater.

…this new group brought with it an underground ethos. This is when it began to be imagined as what Hakim Bey called an “interzone” —a secret caravan oasis, a chink in the armor of society, a place where you can get in and get out, like some artistic Viet Cong, and get away with things. Bey had styled this “poetic terrorism.”

Larry Harvey — How The West Was Won: Anarchy Vs. Civic Responsibility 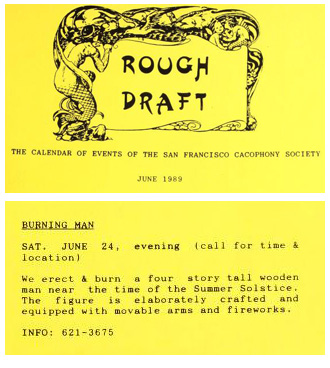 The June 1989 Cacophony canon, Rough Draft invites you to call for information on the burning of a four story tall wooden man.