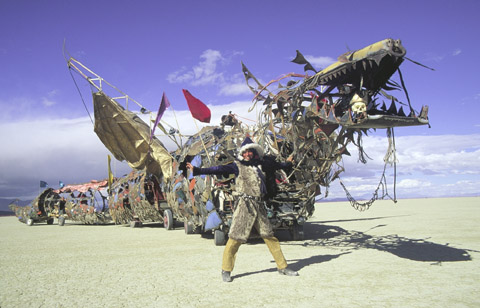 Draka is the Flaming Metal Dragon I built as a mobile Art Installation for Burning Man 2000. In relation to the Burning Man theme of the Body, this creature was designed to function as the Man's Spirit. Lisa Nigro - The Leonardo Gallery

This isn't a theme park. Nothing out here has been "sanitized for your protection". It's dirty, it's dangerous, it's real. And that's just how I like it.
At the Temple of Atonement we take our pleasure and our pain very seriously. ... Danger is the ultimate aphrodesiac...Burners love to mess around with that kind of energy.. This one camp, Headless Maiden wouldn't give you a drink unless they could mark you first. They'd put a little cardboard cutout with their camp logo on your bare behind, then paddle you with a wooden spoon until you had a welt of the proper shape...
Really, the whole festival is about staring Death in the face, I mean, where do you think the expression "Playing with fire" came from?"
Donn Cortez - The Man Burns Tonight 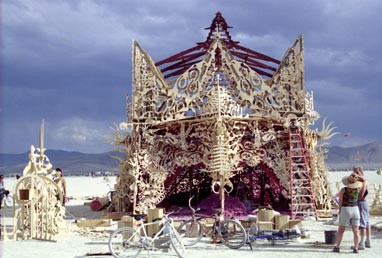 David Best and Jack Haye brought their Temple of the Mind to the playa in 2000, a structure that would become the first of a long line of Temples.

...in 2000, I met with a coalition of committed ravers, drummers, Black Rock Rangers, professional bouncers and sound engineers, and we developed the current sound policy that we still use today. We created the 10:00 and 2:00 loud ends of the city. We officially named the camps habitating that zone "Large Scale Sound Art" camps (LSSA) so as to not distinguish on preference in music, but respect artistry across all (loud) sound disciplines. Harley K. DuBois Managing Diversity: The Zoning of Black Rock City

DVR: What about techno music? There certainly seems to be a lot of it in Black Rock City. Do you consider it intrusive?

LH: Well, I see you've saved the hardest question for the last. Listen, last year an interesting thing happened. As people moved through our Greeter station, we told them that the quiet side of town was to the right. In many cases, we didn't have to tell them. They knew and they cared. After a couple of days we noticed that end filling up. We finally had to request that people go left. It began to seem like a bunch of roommates huddled at one end of an apartment because somebody wouldn't turn down their stereo.

LH: I've no idea what their musical tastes might have been. A lot of people like techno. But I think it's safe to say that a whole lot of people didn't like really loud sound as a fixed part of their lives, especially an incessant bass going thud thud thud until dawn. It's not about music. It's about sound. Sound is a peculiar thing. Unlike other forms of expression, it can affect other people in a very intimate way over long distances.

DVR: What if it's turned down?

LH: You are naive. A certain kind of loudness is a part of the aesthetic. It's meant to penetrate your body. People bathe in the sound. Asking folks to turn it down is sort of a non-sequitur. This year we plan to restrict large-scale amplified sound of this kind to a very limited area. Installations of this kind must register ahead of time. People can go there and enjoy it, but there will be less of it. I have seen 6 or 8 people gathered in front of speakers the size of Volkswagens. But why should the enjoyment of 6 people afflict 600 others? Sound at such levels can travel forever in the desert, regardless of how you insulate it or how you orient your speakers. We recommend earplugs at the event. That and a very broad tolerance for other people's tastes. But even earplugs won't avail against that bass.

We couldn’t believe it was cold again either. And the wind storms were back. Regardless of the elements that came our way, we put our goggled faces into the wind and marched off across the playa.

Everywhere there were distorted, enlarged, even engorged bits of man. The Body theme was evident everywhere — participation and theme came together to form an impressive body of work. And what bodies we built! Anatomy was taken to playa proportions: a 20 ft. flaming anus complete with slide (by David Normal and Max Hunter); a 20 ft. tall heart (‘Hearth’ by Sidney Klinge and Charles Smith); and of course the familiar 50 ft. Man.

The Body theme was carried out not just in the kind of art that was created, but in the very placement of art on the playa. Laser Man (engineered by Russel Wilcox) outlined the Burning Man across the playa, marking our collective body for the universe to see. This was the world’s first giant pictogram in lasers, clearly visible from the air (and space!).

Beginning with the head and going through all seven chakras, large-scale theme art made a grand axis down through the body’s gut and heart, culminating in its vast diamond-shaped head. 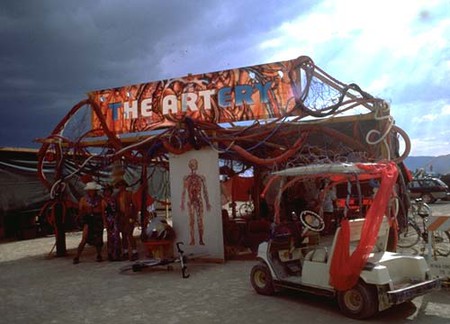 The ARTery is the headquarters in Center Camp for the Art team and the name was coined for the 2000 event, with the theme The Body.
We used to play House. Now we're playing City. - Adrian Roberts, Piss Clear 2000 Early in 2000, a young restauranteur presented an idea for a huge “Cafe” at Center Camp.... It seemed prudent to design a structure which could be taken down, transported, stored and reassembled every year; therefore, it should be composed of durable and modular, replaceable elements. As the winds could come from any compass direction, the structure should be able to effectively disperse potentially great forces. This resolved to the idea of a large diaphragm, a round ring pulled into compression by a membrane which distributed loading from any point. Being slightly peaked in the center, the deflected wind would tend to hold everything down.... We are told that the design was modeled in a computer simulation program and tested there in up to 120 MPH winds without failure. Since first installed in 2000, it has probably not seen winds half that high, but it’s reassuring nonetheless. At those times, it seems somewhat like being in the eye of a hurricane, outside — a roaring "white out", while inside — simply dust and fluttering. Rod Garrett - Creating the Black Rock City Café “We need your help, could you help pull this big fat rope to raise the Man?” …(it takes a village they say)…

The title, “Raising the Man,” can be taken literally, or metaphorically…

The rope and boom system took 120 to 200 people to raise and lower the Man. It didn’t tend to take more than half an hour to raise a crowd for the task amongst our burgeoning populace.

This was always a joy to experience the team accomplishment and satisfaction of a group that, like each person being a cell of a muscle, makes for a mighty lifting arm. It was fun! A sampling of Theme Camps from 2000

The Map of the Body