Man atop the Great Temple The art and people of Burning Man 2003 by Lenny Jones and Claudia Rose. http://www.lennyjones.net/ DPW - Where you swing out of bed at 6:00 am without even trying.
-Where dents and dirt, bruised cut and ripped shirt is the reward.
-A place where a 90 pound little fire cracker woman named DiMilitia runs a metal and welding shop.
-A place where a bashed out, doorless, windowless, ex-cop car, junker can be a chick magnet.
-A place where dust is served with every meal.
-A place where money is fake, and friendships are real.
I love my home on the range.
Coyote - Building Black Rock City 2003 Temple of Honor
by David Best
David's fourth temple on the playa was the evolution of an idea that began three years before with the Temple of the Mind, and was followed by The Temple of Tears and 2002’s Temple of Joy. An imposing multi-story temple made of densely patterned black and white paper over a cardboard and wood frame, the Temple was a place to honor each other, the earth, our families, ancestors and communities. The Temple of Honor also provided a space to address one's dishonor, a place to leave it, to release it and let it go. Just as we need a place to honor those things and people we hold most high, so too we need a space to deal with those people and ideals we have dishonored, including ourselves. The first on playa Bunny March hops out of Bunnywood to Bunnify the Man!

The eplaya is launched. "our new PHP-based ePlaya community discussion board" ...as part of a theme I titled Beyond Belief, Rod and I designed an enormous Pre-Columbian pyramid. A very hardworking army of highly skilled workers led by Andrew Sano constructed this edifice. The pyramid allowed participants to mount a monumental stairway that took them directly to the chamber beneath the Burning Man, and the building now featured a much higher viewing platform. But, more importantly, arranged around its base, we had created eight ceremonial niches — shrines within which any participant could sit contemplatively — our theme related to the immediacy of spiritual experience — and thus self-sanctify themselves. We put the word out in advance that folks should be ready to assume an "otherworldly" appearance in order to make their separation from the outside world dramatically compelling. Nambla the Clown, our friend Ggreg Taylor, heroically stepped in at the last moment to serve as a stage manager, and he and his assistants managed to cosmetically transform many people right on the spot. Larry Harvey

In the year 2003, our annual pilgrimage to the playa affected over thirty thousand souls. The Man greeted the weary travelers perched awesome and proud on an elaborate ziggurat-like pyramid as if saying, “I stand on this place of power as it has been from time immemorial. Welcome home. I will burn for You.”

As intended in this year’s theme, the way in which we experienced life that week was way Beyond Belief. Amid a kaleidoscope of colors, participants became living icons that breathed life to the pyramid from within rooms with windows framed on each side of the pyramid. The icons prayed, loved, played, and reached out from the pyramid niches to interact with other participants. In all their beauty, they mesmerized us, entertained us, touched us, and often took our breath away.

Also, the organization of the Burning Man Project showed signs of a new maturity. With this maturity came a broad base of participation across the globe, with new Regional events springing up, from New Zealand to Australia, from Hawaii to New York. Volunteer Regional Contacts, representing communities throughout the United States and in other countries, began joining us in this movement.

Burning Man, in fact, was increasingly taking on a double mission: In one way, it models what the world could be, and in another it embodies dedication to changing what the world is.

Read more in the 2003 Afterburn Report 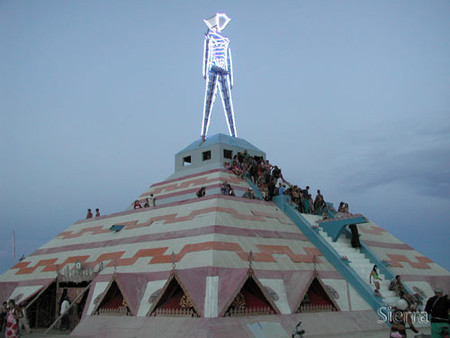 Beginning with the dawn of human consciousness, mystics have sought out this realm of super-charged experience. They have retreated into caves, removed themselves to mountaintops, and disappeared into the solitude of desert space. They have relentlessly emptied themselves of our world; they have fasted, prayed, and kept vigils — all in a pursuit of that which cannot be compared to any other thing. What these pilgrims have encountered on their outward journeys into nothingness is matter for conjecture. The only proper answer of the faithful to the skeptic is that one must be there if one hopes to understand. In the year 2003, we'll populate this world beyond our world with artworks that evoke such visions. Theme: Beyond Belief In 2003, we initiated mandatory pre-registration for mutant vehicles. This change simplified paperwork on the playa, and allowed us to set up an email list to distribute important information. We set specific hours for registration of vehicles with flame effects, which lessened the load for our inspection team and shortened the wait for those vehicles' owners.

For the first year the "survey" is known as the "Census"

I'm a Clown AND I have a megaphone. Now what were you saying?
- Nambla the Clown The Burning Man website is entirely redesigned, with a new back end, more features and a more dynamic home page. The Center Camp Cafe by 2003 had well established traditions including elaborate decor, art exhibits, the painted benches and each year's stage backdrop.