Man on 14' platform with haybales In 1999, our theme was "The Wheel of Time," and for the first time ever, the newly-formed Art Department decided to map the art in a theme-based pattern. We created a map that represented a clock face, with the Man at the center, and twelve major installations mapped at the hour locations just off the Esplanade.

On Friday night we staged a series of performances, starting at 6 PM, at the 6:00 position. Dana Albany’s Bone Tree led participants around the clock face, where a performance awaited them every hour, on the hour. Of course by about 3AM it was freezing, and the weather put an end to our grand cavalcade of performances. We did learn, however, that arranging the art installations in some sort of logical pattern added theatrical significance and prominence to the art. Returning to Black Rock City after a years absence, it sometimes feels as if one had never left the desert. Within this changeless world time seems suspended. We build the same city, we burn the same Man, and by these actions we are changed. Ritual time is cyclical time and quite unlike the ordinary measure that divides our daily lives. Armed with a digital camera, surveying equipment, tons of food, several computers, lots of clean socks, boxes of tools, sleeping bags, toilet paper, hats, gloves, sun glasses, chapstick, two-way radios, several pairs of boots, a case of congnac, a case of Tequila, a case of tequila mixer and a truckload of beer the Department of Public Works established camp at the 80-acres outside of Gerlach, Nevada. 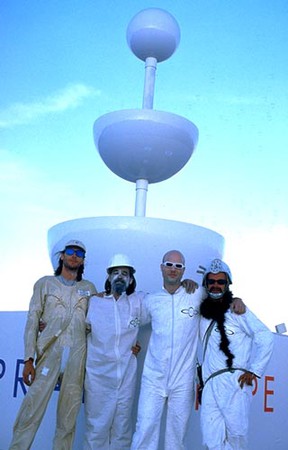 If you think the art of Burning Man is all about pyrotechnics and welding, you need to spend some time with the Futura Deluxe Bubble Fountain and Porta-Temple. You may have seen it rounding up the Processional last night; a message of hope to close the funeral for the 20th Century. A white box with the words hope, pray, wish and dream painted on each face supports two white plastic hemispheres to float over the playa... The Futura is the brainchild of Steve Raspa, who made the Sacred Prayer Grove and Lottery in 1998. Aaron (Wolf Baum), Simon Clark and a team of volunteers spent two months helping Steve build the fountain in San Francisco's Cell Space.... A woman's voice recites messages.. in the future, we discover, everyone will be issues with one orange ticket. Children will scrape their knees on the sound barrier. Small spelling errors will lead to the downfall of nations. Aaron says "We want to make people think about all possible futures. Each bubble is a possible future-- that's one way of looking at it." Rachel Nevada - Black Rock Gazette, September 4, 1999 Performances included Sisters Kitty and Dana looking on as another sinner against the rodents confesses his crimes at Ladybee's Shrine of the Dessicated Rats.

Black Rock City 1999 was a year that began with heavy windstorms and included bitingly cold desert nights on the playa. “The Wheel of Time” was our art theme and our streets were named after planets in our solar system — Neptune, Uranus, Saturn, Jupiter, Mars, Earth, Venus, Mercury — and divided by annular streets spanning from 2 o’clock to 10 o’clock.

The Man stood at the center of our living timepiece and was surrounded by an inner clock that was used to showcase large-scale art and performances related to our theme. Divided into hemispheres and quadrants surrounding the Man, all theme-related art was placed as it pertained to our current timeframe, our immediate past and our perceived future.

1999 marked the first year that the Burn was scheduled for Saturday night, instead of the usual Sunday, to allow participants additional time to clean up and leave no trace before their departure. Before the Man was ignited on Saturday, it was Jim Mason’s three enormous fire cannons that shot flames 120 feet into the sky which warmed the faces and bodies of the gathered crowd. These were the same faces that brought over 320 registered theme camps and 4 large villages to the event.

You may die here, but you'll never be so alive.
- Danger Ranger One year a friend of mine said, "hey you want to go to Burning Man?" What the hell is that? I had no idea what it was, got there and went, wow, this is great, but the music sucks. It was pretty much rave music or nothing. So I came back from Burning Man that year and told my friends, hey, you gotta go check this camping trip out. One of the reasons I wanted to come back out here is because I had a good time, but I wanted to bring decent music out to the desert. The aesthetic of the club I run, Death Guild, is pretty jarring and clashing with the existing culture that was out here. We dress in black, we carry knives, we have big scary machines, we're completely contradictory to the soft and fuzzy free love hippie environment of the rave culture. So the following year more of my friends came out, .. and we started researching what we would need to do to build a dome for people to fight in. David King -- Death Guild Beyond Burning Man - SpikeTV, Director Steve Farrell Invented by "The Wizard," Tim Black, Lights 2000 (known as L2K) is an interactive installation first exhibited at Burning Man in 1999. Tuesday night, Capitalist Pig Camp was escorted out of Burning Man after several complaints were lodged against them .. The rules of Black Rock City are quite simple. Anything goes as long as you take care o your own survival and do not interfere with another's experience. ... you cannot do anything that infringes on the freedom of other participants.

Complaints continued about Capitalist Pig Camp. Four women were in tears, and one neighbor threatened violence. "The worst was the tagging," said [Ranger] Big Bear. "They tagged the Man and other peoples' art with spray paint. The decision came to evict them when they made sexual comments to a twelve-year-old girl on Tuesday."

"They tried to argue that this was their art, and that they were expressing themselves artistically. This is the most free city on the planet. I have not problem with bad art, but these actions were aggressively ant-social."... Says Big Bear, "They basically evicted themselves."

We use self-expression to create a sense of community. These folks were verbally assaulting other people. It's not enough to simply express yourself. That expression should take the form of a gift. It is meant to be shared. These people were intentionally imposing their behavior on others. They sexually harassed a little girl and defaced other people's art. That's the opposite of a gift. Oh My Gawd! by Harrod Blank who brought one of the first Art Cars to Burning Man. Image Zsolt Krajcsik

... starting in 1997 only art cars were allowed to drive the streets of BRC. At first, you could drive if you were driving an art car, and if you were driving something else, you were asked to stop. After a couple years of this, it became apparent that a little more organization and planning was needed, and the Department of Mutant Vehicles (DMV), then a part of the Rangers organization, was formed. Jewelz Cody, having been in the Houston Art Car scene for many years already, took on the task of heading the DMV. In 1999, the DMV used its first stickers to license art cars, which were the iconic round BRC stickers. Wally Bomgaars - The Department of Mutant Vehicles

In 1998, the "techno ghetto" was no more. By 1999, when the final Community Dance camp was staged in Landon Elmore's recreation of the Barbury Triangle Crop Circle, the sounds of psytrance, breakbeats, tribal house etc had become flush with the soundscape of Burning Man.

Other participant performance on the playa included